Cloud analysis is arguably the future of mobile forensics. Whether or not the device is working or physically accessible, cloud extraction often allows accessing amounts of information far exceeding those available in the device itself.

Every time we release a new feature or update our cloud forensic tools, general public meets the news with a healthy dose of sarcasm. The latest example is the MacRumors article “ElcomSoft’s Latest Tool Can Allegedly Access iMessages in iCloud, But Only in Extreme Circumstances” about extracting messages from iCloud.

The story received a lot of sarcastic comments. “So they can access your data if they have access to your data…? Sounds like that to me”, posts a MacRumors user commenting the article. “HEY YOU KNOW WHAT I found a security hole in my bank’s ATMs, if someone has my card and PIN they can take out my cash!!! HOLY CRAP WHAT WILL WE DO NOW!??!”, adds another user (original spelling preserved). “BREAKING NEWS: If someone gets your Apple ID, Password, Passcode, AND PHYSICAL ACCESS TO YOUR DEVICE, they may be able to get your info! You HAVE BEEN WARNED”, exudes yet another commenter.

Can you spot something wrong with these comments? After all, one “can” access information if one has the correct credentials, right?

Apparently, not one of the users repeating the “it can be done” mantra has ever tried doing this “can be done” thing.

Speaking of Apple’s closed ecosystem, having the correct authentication credentials does not mean one has “access” to information, let alone “easy access”.

Cloud Forensics: Why You Need Tools

Let us start from an easy exercise. I give you the login (Apple ID) and password to a test Apple account; you try extracting application data, passwords and messages from that account. Let’s assume both you and I have access to the secondary authentication factor, and we both know a passcode (or system password) of the test device. I will use Elcomsoft Phone Breaker, and you can use anything you want – except any forensic tools.

This is what I do.

Step 1: I authenticate into iCloud with login, password, and 2FA

Step 2: I download all the synced data, including passwords and messages, to my computer. There, I’ll enter the test device passcode:

It takes me 1 minute and 52 seconds to obtain the data. Proof:

Step 3: Finally, I obtain the backup:

So you crave for a spare iPhone, iPad or iPod Touch, and make sure it runs the latest version of iOS. You set it up, restoring a cloud backup (the owner of the test account receives an email alert) and wait (normally 30 minutes to several hours). You enable iCloud Keychain and Messages sync (the account holder receives yet another alert) and wait (no defined timeframe).

Once your device has everything set up, you can view passwords one by one via Settings: 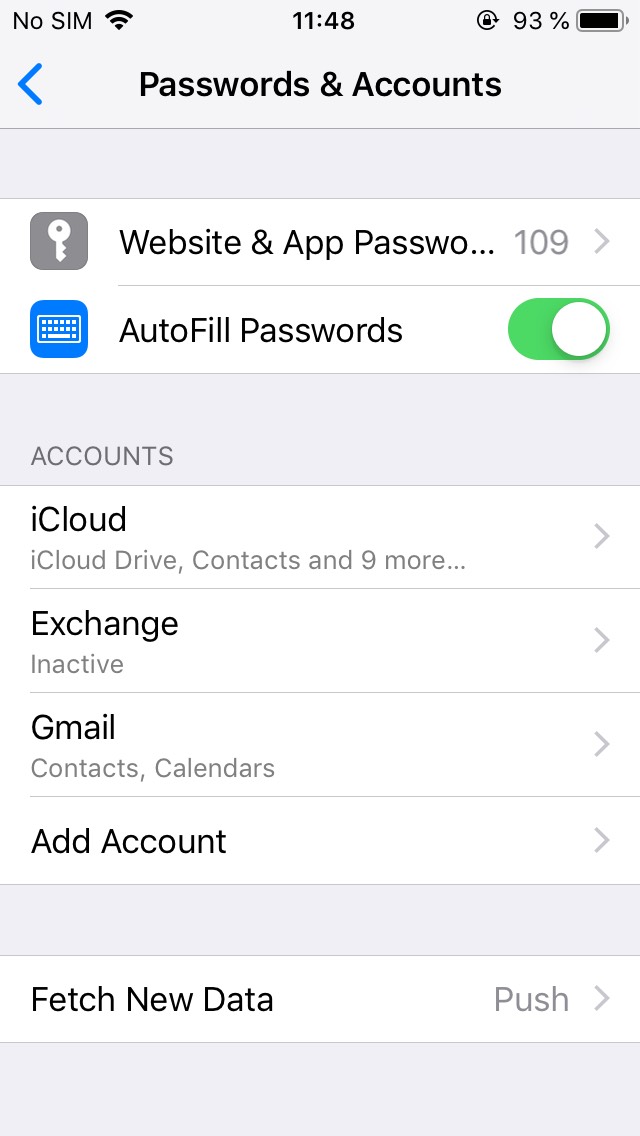 Messages can be accessed via the Messages app. For application data (iCloud backup) dumped for offline analysis, you’ll have to back up the phone via iTunes and process that backup to analyse information. (By the way, did you know you must specify a temporary password for that backup in order to access all information? You’ll need to decrypt it afterwards; doing so may be difficult if you’re not using forensic tools).

Note: there will be no Maps data as it won’t be included in local backups. If you need access to the user’s Maps data, you’ll have to use Elcomsoft Phone Breaker or similar forensic tool.

If there is more than one backup for a given device, you’ll probably want to repeat the procedure starting with a factory reset.

Once you’ve completed the task, let me ask you a question: how much time did you spend? Was it an easy experience? If you did it as part of your daily job, how many cases would you process per day?

One of the arguments we keep hearing repeatedly is the GDPR clause. According to these sources, one can simply fill out the form at https://privacy.apple.com/and receive a downloadable archive packing “everything” Apple knows about the user.

In fact, Apple’s “everything” for GDPR is not really “everything”. A screen shot below shows the full list of data categories that are exported with GRPR pulls. 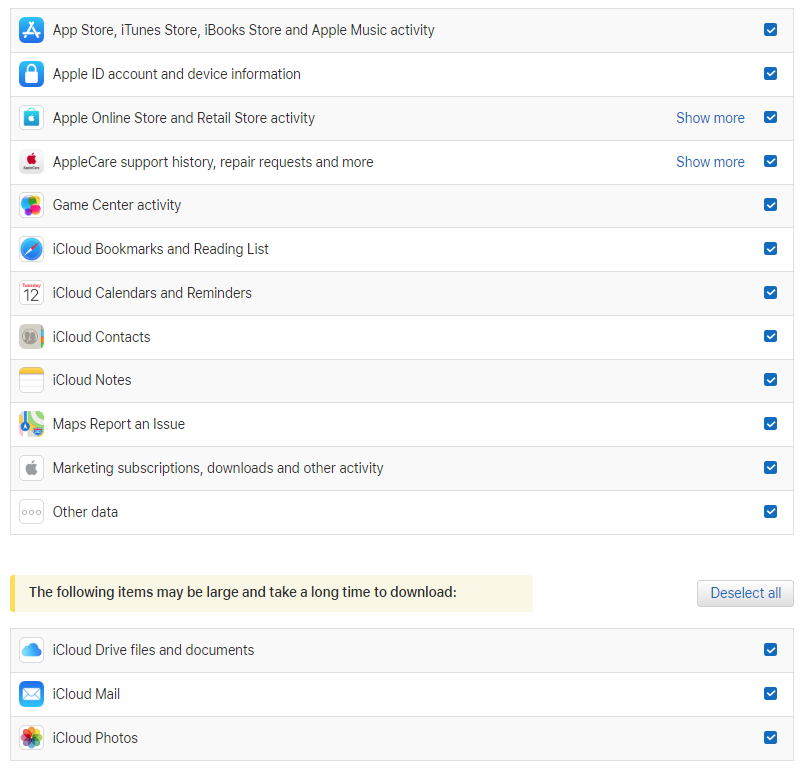 If you look closely, you’ll notice that two major categories are missing from information pulled via GDPR requests:

Apple argues that these bits of data are additionally encrypted with a key protected with a passcode or system password of an already enrolled device. For this reason, there is no option for the user (or investigator) to access these types of evidence via GDPR requests.

So what can you actually do to access passwords and messages?

If you have the correct credentials and you’re sceptical about using forensic tools (cough, Elcomsoft Phone Breaker, cough), you’re looking at the following procedure.

You did it! You did a great job, learned something and spent several hours of your time.

But what if you used a forensic tool instead? The same task would be completed in about a minute. It took us 33 seconds to pull the passwords:

Then another 27 seconds to obtain messages:

Back to GDPR. What about the rest of the data? Apple states it may take up to 7 days to process GDPR requests. In our experience, it’s been taking Apple exactly 7 days to return the data. 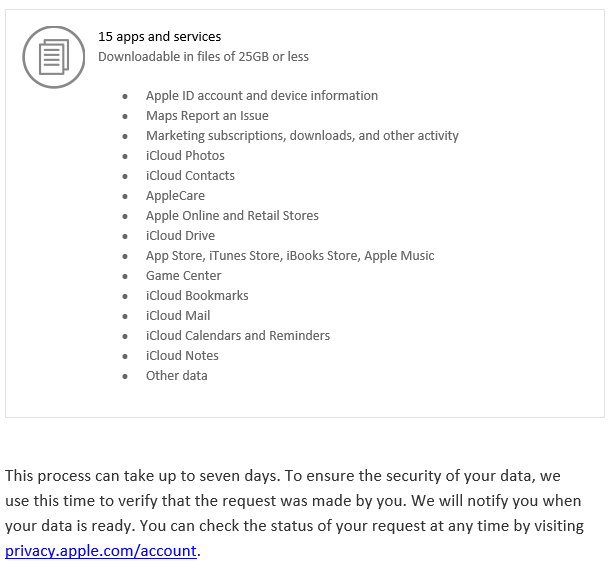 If you can afford the wait, I say go for it. If not, we know a faster way.

Law enforcement has long been able to obtain evidence via government information requests. Speaking of Apple accounts, that would be two orders: an Account Preservation Request followed by Account Information Request. All requests are handled in compliance with Apple’s privacy policy.

When serving a government request, Apple provides information in its own proprietary format. Investigators receive information in an encrypted form. They are provided with a decryption key but not the tools to actually decrypt the data. The decryption process is complicated to the point that many experts make use of third-party tools such as Kleopatra or GPG, or book the decryption service provided by companies such as Cellebrite or BlackBag. The resulting decrypted data will be in binary formats, so some more tools will be needed to analyze it.

* “Emergency Requests relate to circumstances involving imminent danger of death or serious physical injury to any person. Apple has a dedicated team available around the clock to respond to Emergency Requests globally. We process requests on a 24/7 emergency basis.”

Cloud Forensics: When You Need Tools

With unlimited time and a spare Apple device you can access many bits and pieces of data. Using forensic tools (Elcomsoft Phone Breaker in this context) allows you to accomplish the same task in a fraction of the time (minutes instead of hours) even without a spare Apple device.

Technically speaking, cloud forensics is possible without forensic tools, yet it becomes a labor-intensive and time-consuming experience that requires additional hardware. The result is not forensically sound due to the many additional artefacts introduced during the course of setting up-restoring-syncing-backing up the device during the course of cloud extraction. If you have the credentials, you can pull iCloud data without using any forensic tools as a one-off trick (albeit the result won’t be clean or admissible in the court). Doing it regularly as part of your regular job, or having hard evidence that would be accepted by the court is a different story. 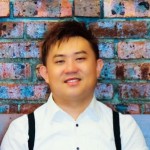 Are you a smartphone user? Understand the risk.

Have you ever gotten this kind of message?

Are you a smartphone user? Understand the risk.

Have you ever gotten this kind of message?